HA…never!!  Today, I’ve done countless loads of laundry, prepped and cooked all the meals for the coming week, took recycle to the store, took care of a cat, did some necessary shopping, mailed off a package, finished up (much-needed) grocery shopping, organized the pantry, and polished off a book.  I’ve blogged on my race on Friday night, made up lunches/snacks for tomorrow, and have even changed sheets on the bed.  And showered.  Important.

This has been a chaotic and crazy week.  I got back into town from a relaxing (ie: NON-RACE) weekend in Orlando, Florida.  Sure, the Star Wars Half Marathon was running at Disney World that very weekend…but I was not quick enough on making a decision to run, and by the time I was certain I was going to be able to do it, registration had closed.  Instead, the day before I headed out to get to Florida, I did my long run.  On a Tuesday night.  On tired legs.  But it was done and I didn’t have to do it alone…or in Orlando, where I had no idea where I could safely and effectively go running.  As it was, I found a park where I managed 5 miles, and I did 5 miles back and forth on this 0.20 mile boardwalk on Cocoa Beach while I was away.  But that was it for the running.  The rest of the time I was exploring…but we’ll get to that momentarily.

With a couple of days away from the office, I was overloaded with work, so I ended up doing something I hate doing.  I brought work home and put in some time away from the office.  It had to be done…or I’d still be buried.  This made my week even more stressful because I was trying to fit in all my normal stuff while having to do some work at home.  It meant…the normalcy took a lot longer to get around to.  And grocery shopping never happened.  So, my roommate and I were living out of the pantry/freezer/fridge for this week.

So…with all that being said…some good stuff has been going down these past two weeks…so let’s take a look at some of the highlights! 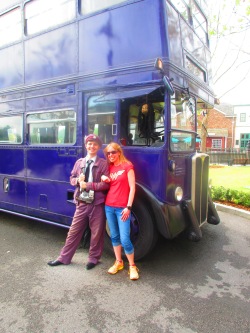 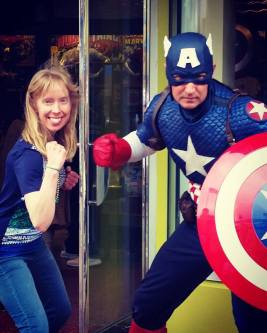 It’s Marvel Superheroes, it’s Harry Potter, it’s rides, rides, rides.  And I had an absolute blast.  I met Captain America (he told me I had beautiful green eyes!), which had to happen as he is the favorite superhero of my nephew, Chace.  I flirted with the driver of the Knight Bus at Diagon Alley in Universal as well.  SO MUCH FUN.  That being said, I vastly prefer Disney to Universal, but it was actually nice to step away from the Disney monster and do something I’ve been wanting to do, but couldn’t pull myself away from Disney.  HA!  And thank goodness for my friend, Jenn, who was willing to go on the thrill rides with me.  Cathy refuses.  She’s a big baby.  OH…and I bought a wand.  I have my own Harry Potter type of wand.  It’s Ivy…with a Unicorn Hair core.  And I loved it because I was able to cast magical spells at both of the Harry Potter lands at each Universal Studios theme park in Florida.  It takes so little to make me happy.

Eating out with me can be…difficult at times.  Thank you Celiac disease and lactose intolerance.  That being said, while I was in Orlando, thanks to my Find Me Gluten Free app, I found the most perfect place to dine.  In fact, we (Jenn, Cathy & myself) ended up having dinner there three times.  The place is called Toasted, and it specializes in Crafted Grilled Cheese & Burgers.  And…they have gluten-free buns, bread, and veggie burgers.  They also have vegan cheese.  This…was my happy place.  To top all of that off…they had gluten-free fries.  And, let me tell you, the Truffle Oil & Rosemary fries were to die for.  We learned, after our first visit, that one order of fries would do for the three of us.  Amazing sandwiches.  I had a different one each night…never got sick.  Let’s hear it for gluten-free dining done right.  If you find yourself in the Winter Park area of Orlando…go and check them out.

Okay…I admit it.  I love my desserts.  I have tried, for ages, to give them up.  But the sweet tooth reigns supreme.  For sure.  And, after getting my roommate a little tipsy on her birthday, I took her grocery shopping.  And bought a bunch of stuff I didn’t need but wanted to try.  And, despite trying to be a little better about my choices…I discovered a new product from Schär‘s Sch’nacks!  These delightful little treats are simply a gluten-free, unrolled version of a Swiss Roll.  They are little single serve cakes that are filled with cream and dipped in German chocolate.  And they are light, and amazing.  I have to resist buying them too often…but a treat every now and again is always fine.  There are 10 cakes per package…and I only have one after dinner each night.  Seriously…a worthy investment for an every-now-and-again treat.  Back to some fruits and vegan yogurts after this.  And I’m back to cooking real food…and not just living out of the fridge/freezer/pantry…which is also a plus.

Today, I meandered over to Schwinn in Clarksville, Indiana, and purchased a pair of road bike shoes.  Now that I have a road bike, I figured I needed to get the clip-in shoes so I could ride it.  They are very nice at Schwinn and even discounted the price of the shoes and put the cleats in for me.  YAY!!  I hope to get fitted to my bike next weekend, time permitting!  Crossing my fingers.  Then, I get to practice clipping in and out…and probably taking a few spills during said process.  It’s actually…kind of exciting.  Not the falling part, but getting the necessary gear and stuff done to get out onto my bike.

5.  Running my fastest mile at my favorite 5K

Tim, Ruth, Amber, Becca, Me, and Linda after the Pro.Active For Life 5K…all sporting our bling! 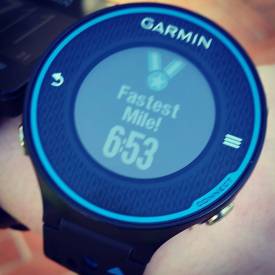 My Garmin says this is the fastest mile I have ever run!!

Friday was not only Earth Day, it was the running of the Pro.Active For Life 5K in Frankfort, Kentucky.  I go to Frankfort quite often for the races, and while 5K races are one of my least favorite distances, this just happens to be my favorite 5K race.  It’s not just the race itself, but the people.  Frankfort, honestly, some of the best people in that running community.  I can’t say it enough.  Not only did I win my age division this year, but I pulled off a 6:53 mile.  Shocking myself.  Even more shocking…the entire run was pain-free.  And…I was only 6 seconds off my PR (also set at this race).  Stronger every day.  Trying to be really smart when it comes to my training.

So, Friday night I churn out a speedy 5K (even if my finishing picture looks like I’m just cruising, LOL!), knowing that Saturday, I was on my own for my longest run since…forever.  I am signed up for (although still not 100% sure I’ll be running) a marathon in June.  Bib transfer can only happen through May 1, leaving this Saturday the only chance I had for attempting a long marathon-training type run.  And, I had to do it solo, as everyone I know is either recovering from Boston, running Big Sur, running London, running Derby or running Flying Pig.  So, they are either recovering, out of town, or tapering.  So, Saturday morning, I laced up, still feeling good, and went out for 20 miles in my area.  No crossing the river (it was Thunder Over Louisville day anyway…so this was probably better in the long run…ha…I made a punny).  So, I just sort of went.  I never pushed my pace…I ran comfortably and just sort of made the route up.  The last 5 miles, however, I decided to make the toughest.  I don’t know why.  I’m sadistic like that.  So I hit up the Fast Freddie route…which is HILLS FOR DAYS!…and came out of it better than I even expected.  Once again…no pain.  And 20 miles done.  Alone.  And way better than I dreamed.  WITHOUT ANY PAIN!  I spent the rest of the day out and about, doing some grocery shopping and regular shopping and eating good food for recovery and fuel.  This…was the type of run I mentally needed.  And while it does make me feel better, I still don’t know if I’ll run in June.  I’m pondering for one more day before making that call.

The new season of GoT starts tonight, and unlike last year, I’m set.  HBO Now was downloaded this morning and I’m set to watch this season as it airs, instead of getting spoiled.  I know I read the books, but the show has gone away from how the books actually worked out, so it’s nice that I won’t have to attempt (and fail) to avoid spoilers this time around.  It’s the little things in life.  SO…YAY!!  It’s the little things in life…like Season 6 of Game of Thrones. 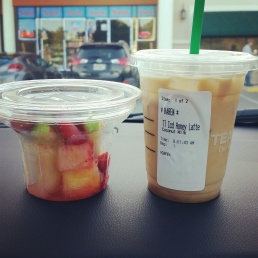 They keep selling out of it, but when I went to Florida this past week, I was introduced to Starbucks latest (and greatest) drink.  It’s the Caramelized Honey Latte and it is AMAZING.  It reminds me a lot of The Bee Sting, one of Ha Coffee’s signature drinks in Kauai (I miss Hawaii!).  I get mine with coconut milk and it is…OMG…to die for.  I had it hot and iced while in Florida. The Starbucks at Universal Studios City Walk sold out of them…and the one here in our local Target sold out too.  I think this drink is quite popular.  And it should be.  It is made of super YUM!!  If you haven’t tried it…RUN, do NOT WALK, to Starbucks and give it a try.  You’ll thank me for it.

So, there are some of the highlights these past couple of weeks.  Here’s to hoping for a bit more relaxed and easier week ahead.  And I hope everyone had a great week and enjoyed a beautiful weekend.  And for anyone racing this coming weekend…good luck!!