The mileage is totally going up as my race in early September creeps closer and closer.  And as there weren’t any running plans being tossed around with the normal group I run with…I made plans to run with a couple of speedy guys in Frankfort, Kentucky on Saturday.  We were doing 18 miles.  And for the first 13 miles…we were running the Kentucky History Half Marathon course (which is hilly hell)…and then we were going to run to their neighborhood for the additional 5 miles.

This started off really well, and the first 13 miles went great.  After that…it all came apart and went to hell.  We started off this massive hill and it was just like…my legs didn’t want to move anymore.  They were feeling fantastic up until that point.  And this…this just killed me.  Nothing messes with your head more than having a great run go bad.  I felt bad, slowing down the speediest of the group, as he wanted to do the 18 miles at his MP, and I was running at least a minute slower than he needed to be running.  When I hit the hill…it was even worse.  The struggle…was more than real.  It occurred to me that my September race was going to be way harder than this, and the fact that this course completely shattered my confidence I had been building up.

It was brutal and after I sent one of the runners on, and the other one never got past the 13 mile mark because he stopped to talk… got myself a bit lost and turned around in a city I really know nothing about.  I might have cried a little.  And ugly crying and a bad run make everything worse.  SO…I ended up turning around, heading back toward downtown, and rounding off the mileage on my own.  I got there, but it wasn’t pretty and I felt pretty defeated the rest of the day.  But, on the plus side, I did get the mileage in and I stepped a bit outside of my comfort zone to do it too.

So, when I went on my little shakeout this morning, I had a little heart-to-heart with myself as I ticked off a couple of easy miles.  And that is…my new focus…and I leave it to The Doctor to share it with you…

I get so down on myself and hard on myself regarding the paces I can hold, maintain, or even run at different points of the week.  Right now, I need to just focus on the whole…running thing…and less on how much or little time it takes me.  Let’s face it.  A 7 mile hill climb at the start of a marathon is going to SUCK…and right now, I should focus on just prepping myself mentally as well as physically by simply setting the numbers and data aside…and basically…just running.

And with all that being said…the best thing ever happened this past week as plans for my September race started falling into place.  One thing that is going to be entirely necessary is having people around to get me through what will likely be a challenging and…humbling race.  And all the ladies that are traveling with me are on board.  And I feel a LOT better about at least my post-race stuff thanks to that simple fact.

The gang is getting back together.  It’s been way too long since the four of us have gone on an adventure.  And I promise not to get my purse stolen this time…

Anyone else watching the Tour de France?  I was watching it yesterday and was just blown away by the way these cyclists command that course.  They are amazing and inspiring.  Seriously, it does make me want to get back on my road bike…but ever since taking that spill and having so much trouble unclipping…I just haven’t felt like risking my bones and body in another potential fall.  So, I’m watching all these athletes cycling like mad on the roads of France and they’re just…FLYING!

And I get on a bike and I feel like…

True story!  Well, the only way to get better at something is to practice, practice, practice.  I am going to look at getting my clips loosened…or possibly new pedals.  We’ll see what happens after that.  Fact of the matter is…I want to get back on my bike.

My other favorite thing this week…going over to Bryan & Michelle’s house on Friday night, eating Daiya pizza, watching Kung Fu Panda 3, drinking a little wine (Reggae Red Wine), and just having more laughs than I’ve had all week.  Seriously…it was just the unwinding that I needed at the right time.  And I love these two.  Two of the best friends I’ve made since moving to the area.

And…SHE. BOUGHT. PIZZA. I. CAN. EAT!  So much love!  I was eagerly eyeing them in the oven ready to devour.  We all know…pizza is my favorite!

I made Gluten Free and Vegan S’mores for dessert.  I think Michelle now wants a kitchen torch (which is how I toasted said marshmallows)! 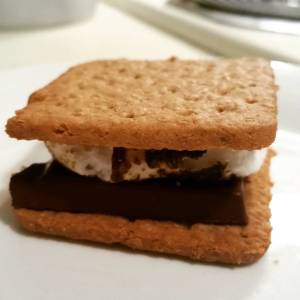 They were a hit!

Pizza party, Panda, and discussion of what a Chi Biscuit would include.  HA!!  God, I love my friends.

And that was pretty much my weekend!  It was a decent week leading into the weekend.  And when my Saturday night finishes up with dinner at Shalimar (mmm…Indian food!), it’s a good time.

Speaking of movies…last night I watched the movie Chef.  It had been on my list for awhile, and all my friends kept telling me I had to see it.  They were right.  I loved it.  It made me really want to go to culinary school.  Maybe not to run a food truck…or…perhaps…to run a food truck.  HA!  If you haven’t seen it…get on Netflix and watch it.  You will thank me for it.

So, that was pretty much my week.  Sort of a bumpy ride…but more ups (mentally and physically, HA!) than downs.

How do you overcome challenges?  Ever have a run fall apart on you?  How do you mentally and physically recover?  I want to know!!

Have a great week!

2 Replies to “The Struggle is Real”