Normally, whenever I venture up to Indianapolis for an event, race, or whatnot, my one requirement is a stop at Cheeseburger in Paradise…because I can get a gluten-free veggie burger with gluten-free fries (or sweet potato fries)…and the burger custom made (no cheese; no sour cream) to fit my dietary needs.  This is awesome, as any frozen burger patty, or even homemade burger, tend to be a bit mushy and end up slipping out of any sort of gluten-free bread used as a bun (be it an actual gluten-free bun or just some gluten-free bread).  Cheeseburger in Paradise doesn’t have that problem…and it’s nice to be able to safely eat a veggie burger (so many use breadcrumbs as binder) out at a restaurant AND not have to eat it with a fork and knife (meaning…they have a gluten-free bun and I can pick it up).

Needless to say, I ran two half marathons, two weeks apart up in Indianapolis.  After the first one (OneAmerica 500 Festival Mini Marathon), I did hit up Cheeseburger in Paradise.  But two weeks later, I wasn’t ready to revisit Paradise.  I just had it.  My craving had been satisfied.

That being said, when I returned to the Indianapolis to run the Geist Half Marathon, I wanted to try something different.  Step out of the comfort zone…try something new.

I had been hearing some buzz around a place located in Greenwood, Indiana, by a bunch of my friends up in that area.  It was a craft beer tap house called Hops & Fire.  And what was pointed out more than once was that when you step inside to be seated, the hostess will ask if you require any special menus.  In addition to their regular menu, they have extensive vegan, vegetarian and gluten-free menus.  I told her I was a gluten-free vegetarian and she grabbed both of those menus and a regular one for Cathy and told me that the menus don’t often cross over each other, but anything on either menu can be made gluten-free, vegan, or vegetarian.  She took us to our table and we were seated.

Our waiter was totally adorable and came over to introduce himself.  His name was Kyle and he asked how we were doing.  Cathy pointed at me and said, “Well, she just ran a half marathon…”  He raised his eyebrows and said, “So I’m guessing you want water.”  HA!  He was so right.  Cathy had thought about trying one of their craft selections, but in the end started with the water.

Two menus and having so many options was a bit overwhelming to me.  The only thing I knew I wanted to try was Gluten Free 3-Cheese Garlic Bread.  I bought Lactaid specifically for this meal.  No joke.  We went ahead and mentioned that we wanted that as an appetizer and Kyle said he’d put that in while we finished making our decisions on what to eat, as it was the appetizer that took the longest to prepare.  While he was gone, I started to narrow down my choices, getting it down to three options.  After a little back and forth and pros and cons, I went for the one that didn’t contain cheese…as I was certain I was about to consume more cheese than my body was going to like momentarily.

Kyle returned to take our order, and as usual, as I’m the complicated one, I ordered first.  I went with the Gluten Free California Wrap…keeping the House Chips as a side.  Cathy went with the Stout Pork Belly BLT, which was served with a side of their Parmesan House Chips.  Orders were in…after Kyle had to go and figure out how to combine two menus to make a dish.  Poor guy!

Only a few moments late, a large plate was being carried to our table and put in front of us.  Clearly, when I saw the fact that I could get Gluten Free 3-Cheese Garlic Bread…I didn’t read the description.  This plate and appetizer was HUGE.  Definitely enough for 4-8 people.  Hops & Fire Gluten Free 3-Cheese Garlic Bread ($9.00), is a full gluten-free baguette, which is drenched in roasted garlic and salted butter, served with a gooey, melted blanket of shallots and chives, which are smothered in Provolone, Mozzarella, and Romano cheeses.  This is then baked so that the top of the cheese gets golden and everything is melty and ooey-gooey.  It comes with a side of marinara.  I took my Lactaid and hoped for the best (sometimes it helps; other times, it doesn’t).  I grabbed the slice on the end and pulled it away, the cheese stretching and making me…so happy.  I cut it up, dipped a piece into the marinara…and immediately lost my mind.  If you go to Hops & Fire, this is their signature appetizer and it is not to be missed.  The gluten-free baguette was crispy on the outside and that perfect toasty, but still soft on the inside.  The cheese was melted to perfection.  The garlic was superb.  Yeah…this made me SO happy.  And, for the record, the Lactaid worked…this time.  Thank goodness!  This was A LOT of food, so Cathy and I said we’d eat half of it and get a box and take the rest of it home.  That’s what we did as our food arrived.  We boxed it up…and it was lunch the next day. 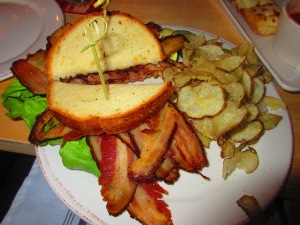 So, let’s start with Cathy’s lunch, shall we?  My om-nom-nomnivore (haha) friend loves to eat pig in any form she can.  This is no joke.  She loves her pork products.  So it was no surprise to me that she chose the Hops & Fire Stout Pork Belly BLT ($12.00) off of their Brewed Baskets selections on the regular menu.  It came with a decent serving of their Parmesan House Chips on the side.  This sandwich is not your typical BLT.  Hops & Fire serves up a stout beer and kosher salt-brined local pork belly, which is seared, roasted, sliced thin, and pan fried, then topped with baby bibb lettuce, beefsteak tomatoes, and homemade apricot onion jam…served on their grilled garlic shallot bread.  Here’s the thing…they do NOT skimp on the pork belly bacon in this BLT.  Not one bit.  You’ll see by the photo I’m putting up here for those of you who are not a gluten-free vegetarian like me.  I mean…it was BACON. FOR. DAYS.  She had more bacon than Parmesan House Chips.  And that’s not a bad thing, as the protein is, honestly, what you are shelling out money for.  She said the garlic shallot bread was amazing (we Celiacs will never know…).  She said it could have used a slight bit more mayo…but it was awesome.  And yes…she devoured it all and the chips.  Carnivores.  Oy!

As for me…I went ahead and combined an offering on the Vegetarian Menu and asked that it be made gluten-free.  I opted for the Gluten Free California Wrap ($12.00)…mostly because it didn’t have cheese and avocado always wins.  The California Wrap is a gluten-free tortilla that is stuffed and rolled up around fresh sliced avocado, beefsteak tomato, bibb lettuce, pickled onions, and a roasted garlic aioli. OH MY GLUTEN FREE GODS!!  This was a simple, basic, wrap, but it tasted amazing to me.  Maybe it was because I had just pounded out 13.1 miles and was living off of watermelon and water at that point, but this wrap was great.  Gluten-free tortillas are nothing to write home about, and I’m pretty certain this was the standard gluten-free teff tortilla.  But it just serves as a way for me to pick up and devour the veggie-licious produce that was stuffed and rolled up inside.  The aioli, by the way, was delicious.  The avocado was ripe and sweet.  The tomatoes…so good.  I loved every bite of this wrap.  It came with a mountain…no…a landslide of their House Chips, which I couldn’t even finish.  Where Cathy had a decent side of hers, the chips serving was bigger than my wrap…so…I ate what I wanted and left the rest. 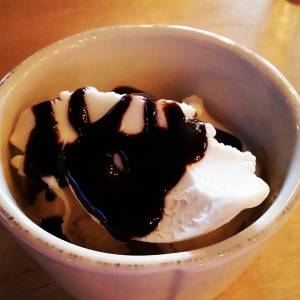 We were full, but we couldn’t end our experience there.  Kyle tempted us with a dessert menu, pointing out that those marked with a gf were gluten free and also the codes for vegan and vegetarian as well.  We were very tempted to get one of the Desserts For Two (yeah…we so wanted the Gluten Free and Vegan S’mores Cast Iron Cake), but in the end, decided we were too full for that and went with splitting a single serving of the Vegan Ice Cream Sundae ($5.00).  This was a small bowl (thank goodness) that had a scoop of vegan ice cream, drizzled lightly with hot fudge.  It was perfect and a great way to end the meal.  It was amazing.  The ice cream was not as creamy as regular ice cream, but it was cold and melty and amazing.  And the hot fudge…that’s always a welcome addition to anything ice cream-ish.

Kyle brought us our check once we had polished it off and we paid in cash and got our things together to go.  We talked about the food for a bit of the drive home…and how amazing and good it was.  I was beyond happy with the service and the attention paid to each dish that was ordered, making sure that it fit my dietary needs…nothing that made me take pause and question whether it was safe for me to eat or not.

I’m already planning my return to Hops & Fire.  So, if you happen to be in the Indianapolis area, or traveling through, do make the trip to Greenwood and check out this amazing and delicious place.  You have a specialty diet…they have you covered.  And I love it.