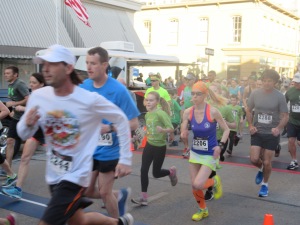 Me at the start of The Good Shepherd Run For The Gold 3K – Frankfort, Kentucky

Race: The Good Shepherd Run For The Gold 3K

It took too damn long to get back to Frankfort, Kentucky for an actual race.  It took way too long.  But…yesterday…despite my own skepticism about being able to do this race and do it well enough to make myself not feel totally out of shape and defeated…I ventured out to Frankfort for what used to be the first race of the Frankfort Trifecta.

The Frankfort Trifecta is no longer a thing.  It seems that the Frankfort Striders stepped in and created a HUGE race series that has something like 17 or so races…and I love Frankfort, but there is no way I can do all of that.  So, I’m sticking to my Trifecta races (all three are still running…just not as an overall series…which is nice because it takes a lot of pressure off of me…having placed the 2 years I competed in all three races) and just hoping for the best at this point.

All that being said, the madness began last night.  I was scheduled for 4 miles that day, so I ran 2.25 of them that morning, saving the remaining 1.8 and change for the race.  I kept the miles easy so I would have some gas in the tank at the end of the day.  BUT…it was also a gym morning so off I went, keeping my usual routine much lighter and easier.  Same reasoning.  And then…work.  I stood for half of the day at my standing desk because, starting on Wednesday after work, my left hamstring had been sore and tight…and I figured that it had a lot to do with how much and long I sat on Wednesday.  Trying to counter that, I did more standing than I normally would have on a sprint effort run day.

Oh…that’s the other thing…I…AM…NOT…A…SPRINTER.  I never have been.  I never will be.  I have short legs that can move, but they need time to warm up and find their strides.  5Ks and shorter races are the bane of my racing existence, and yet, I know the importance of doing them…and so I do.

Where was I?  Oh yes…leg stuff.  My hamstring was still a bit unhappy when I ducked into the bathroom at work to get dressed for the race.  Cathy and I ducked out early to hit the road.  Dinner had to be on-the-go…so it was vegetarian sushi.  Figured it wouldn’t be too heavy before a race, but it wouldn’t have me feeling hungry just before doing it either.  So…yay for that.  We actually hit a few pockets of slow-ass traffic, which hindered our progress to Frankfort, but we got there.  I had to make my mandatory stop at Kroger to use the facilities (if I can avoid port-o-potties, I do…because…PRINCESS!), and then continued into Frankfort to get to the race.  We parked…noticed that the start line wasn’t set up where it usually was…but it was, instead, on the other side of the square.  Interesting.  So, I hiked that way…and realized that packet pickup was not in the building it normally was held in.  Now…with only 10 minutes to race time…I was starting to stress out.  IT WAS ALL DIFFERENT!

And then I found…my dear friend Linda.  She just suddenly was there…a sea of people having parted ways…her back to me…standing on the corner.  I went up behind her and tapped her on the shoulder.  She didn’t know I was coming and gave me the biggest smile and hug.  That helped.

I asked where packet pickup was now and she pointed to a table…then just went over there with me and got my race shirt, bag, and bib.  I handed everything off to Cathy, who began to pin me up while Linda and I talked for a moment.  But, you see, Linda knows EVERYONE!!  So, I got introduced to a bunch of people and got the very fair warning to not run over any kids during the race.  This is important, because this is THAT race where all the kids want to start up front and…well…some of them actually do belong up there, for sure.  Some…maybe not so much, but you gotta love the enthusiasm.  I promised her I would be very vigilant of the little humans.  I wasn’t familiar with the course being run this way, but Linda quickly gave me an overview before everyone started to line up.  There was a prayer and an Irish blessing (it DOES run on St. Patrick’s Day after all) and then we all moved forward and awaited the airhorn that would send us on our way. 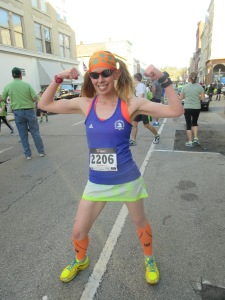 Me after finishing The Good Shepherd Run For The Gold 3K – Frankfort, Kentucky

My legs felt tired and heavy from the start.  The hamstring, much like in the morning, didn’t bother me while moving though, so that was good.  My hip wasn’t aching…but, I raced hard on Tuesday…did 4 miles on Wednesday, and was now racing hard(ish) again on Thursday.  Talk about giving these legs a bit of a workout this week.  And all of this ahead of another big adventure this weekend.  So…while I made a few surge attempts, the legs were sort of reluctant to get moving…even when I willed them to go a bit faster.

We turned a corner…turned again, stepping over a big hole, and took off up a hill…leading to the main drag that would take us up another (steeper) hill and then across a bridge and toward the state Capitol building.  Close to the turn around point, we hit Mile 1.  I didn’t look at my watch, I just kept going.  I rounded the turn to now run on the other side of the road and headed back the way we came…down the long stretch…up to the bridge…then D-O-W-N to the main drag.  At this point, you know you’re getting there.  You’re almost done.  It was basically straight on to the finish line.

I was slowing down, but I wasn’t having it.  Linda was just slightly ahead of me…and then another woman…and me.  I did all I could, minding my form, my hip, and my leg…to try to catch up, but it wasn’t having it.  Once again, I lack that finisher’s kick that other people have.  I even had people just up and sprint by me…as always.  Frustrating when your mind is willing, but your body just isn’t capable.  Between that and the strong wind that was blowing right into our faces…well…yeah.  It was one of those finishes.

But…I crossed…and it was awesome.  I felt good.  I felt…incredible.

All that being said…I grabbed some water and ducked into an alley to do my plyometric exercises and stretches that I’m supposed to do after a run.  See, I can behave.  Well, I did half of them and got bored, to be honest, so I can semi-behave.  We ducked back into the melee and I put my Boston Marathon windbreaker back on…because with the sun going down it was getting chilly.

Rebecca, Linda, and Me…all 1st place finishers in our age divisions at The Good Shepherd Run For The Gold 3K – Frankfort, Kentucky

Cathy was right…I ended up taking first in my age division…and…get this…TYING MY TIME from 2014, when I ran this race last.  I wasn’t expecting that.  I was very, very happy with that performance, considering I was really struggling after that first mile.  My Garmin said my first mile was in 7:01…so…I haven’t run that fast in…a very long time.  VERY long.  And when I do, I can’t sustain it.  So, YES!!  Happy.  SO freakin’ happy because this injury has had me struggling to do this running thing for over a year.  I’ll take a time of 13:09 and celebrate it!!  Embrace it!!

The awards ceremony followed…the only hitch being that someone was being shown as winning female overall that wasn’t the actual female overall winner.  So, they had to pause for a moment and go get it figured out.  I had been chatting with Debbie Brown about my physical therapy and amazing physical therapist when this began and she went to go get it all straightened out.  Because she’s Debbie.  And she’s awesome.

So, once that was straightened out…the awards commenced.  Overall winner was awarded to the correct, and super-fast, Roberta Meyer.  For the overall male winner…it was Aaron Schaffner.  It usually is.  LOL!!  He’s STUPID-FAST!!  As in…blink and you might miss him.  He was also in a Boston Marathon jacket…but I bet he ran his better than I ran mine.  HA!

The rest of the awards for female runners was next…and I took first in the 35-39 age division with my time of 13:09.  My overall pace was 7:04 for the entire 3K distance…so…that’s sort of impressive…for me…at this point in my running.  It was pointed out by the announcer that I was also wearing a Boston Marathon jacket.  Then he said, “Or is that New York.” Cathy said, “She has one of those too.”  LOL!

Anyway…I stayed and cheered for the other winners, took a picture with Rebecca Atkins (1st female 40-44) and Linda [Word] (1st female 45-49).  And then gave hugs and made my departure.  I might have flailed happily as I was walking away, because this was such a huge boost to my confidence…even though my legs and brain aren’t quite working in tandem yet.  They’ll get there.

Me with my age division award at the The Good Shepherd Run For The Gold 3K – Frankfort, Kentucky

So, the official results of The Good Shepherd Run For The Gold 3K are that I finished in 13:09.  I was 35/701 finishers overall.  I was 9/466 female finishers.  And I was 1/62 finishers in my division.  I take nothing for granted anymore.  Every run I am able to accomplish without pain or with minimal pain is a blessing.  Getting through this week of harder runs, and really pushing and challenging myself has not only terrified me, but empowered me.  I said it 2 years ago…and I’m going to say it again…Running is a gift, and I’m thankful I can do it again…even if it means slowing down for a little while to allow myself ample time to heal.

I’m looking forward (or so I am telling myself) to including a bit of speed work in my upcoming training…as well as continuing to focus on my hill repeats (because Frankfort hills are just…relentless!)…and, maybe I can finally figure out how to get that finishing kick.  Until then…relentless forward motion…