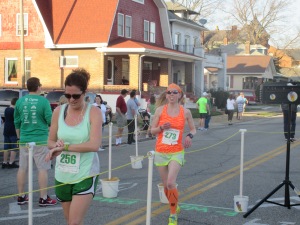 Me crossing the finish line of The Leprechaun 2 Mile Run – Jeffersonville, Indiana

Well…there it is.  Another race this week.  A short one.  A sprint.  But this is the most amazing part of this…

Granted, I think this is, really, the only 2 mile race I ever do…but still…a new course PR for me.  I’m loving it.  With this past year dealing with injury after injury and all the pain brought on by the torn hip labrum, I haven’t done a lot of running.  I’ve done a lot of sitting.  And I’ve done a lot of physical therapy.  I’ve attempted to keep my fitness up by swimming (although I have REALLY slacked off doing that because I’m just NOT good at it) and spinning.  And, to be honest, I hadn’t actually intended to run this race…but Matthew mentioned that he was running it when we were running hills last week at Iroquois together…and as my hill repeats were only 3 miles total at Cherokee Park this week (4 hills + 1 mile), I figured I could do a fast 2 miles instead.  Works out to be the same level of effort, I would think.

So, after work, I went home and ate a quick dinner (avocado toast, because I needed something quick), changed into my running clothes, slathered on some sunscreen…and then headed out.  I needed to be there before 6:15 since I wasn’t registered for the race.  I had to do race day registration since this was sort of a last moment decision (I really blame Matthew, LOL!!).  Getting there took a bit longer.  We took a back route because I-65 was NOT happening.  But, luckily there are various routes to Jeffersonville.  We parked, got out of the car, and headed toward the 300 Spring building.  I had to head over to race day registration and fill out the forms and my bib.  But, I did…paid my $25 fee (okay…so hill repeats would have been free…)…and had Cathy pin me up for the race.  Matthew, Laura, and Michael (from my running group) all found me at the table and we got ourselves pinned up.  Michael, Laura and Matthew went out to run a warm up mile prior to the race.  I did not.  In fact, I stood around and watched people do their stretches and warmups…and eventually did my own…but the struggle is real on race days to get me to do these.  I can’t help it.

The start of the race was getting close, and the DJ said that runners and walkers should head the couple of blocks up to the start.  I began meandering that way, and had a group of people follow me.  So…there was that.

As usual…there were a lot of collegiate athletes, top-of-the-ranks runners (both men and women) and kids who are track and cross-country stars.  The people who have run for schools are amazing.  I never did.  I took up running when I was 30, so seeing these students kick ass is always so inspiring to me.  I can never keep up with them, but they inspire!  Matthew sneaked in next to me.  I totally didn’t seem him arrive.  I have to say, one of my biggest joys being back to running is the runs I get to do with my friends, specifically Matthew, since he and I trained through a lot of hot, humid days in 2013 together.  He’s a strong and fast runner…and he helps me better myself every time we run together.

People who were running out and back to warm up came in and got in the cluster at the green tape that went across the road to mark the start of the race.  The race was to start promptly at 6:30 pm.  But they were ready to get started and at 6:27, Fred began making the instructions for the start.  It was here that Tim, my friend Amber’s hubby, needed to retie his shoe, and just after he finished and stood back up…the whistle was blown.

And we were off.

And Matthew was gone.  I don’t even know where he went.  I lost him…but he was somewhere way ahead of me.  Despite having done 2 miles earlier that morning and hitting the gym with my roommate, I felt strong from the start.

Short races are not my forte.  I am not a sprinter.  I am not good at running hard and fast from the start.  I’m more of an endurance athlete.  I like the build up.  Two miles is my warmup…so these shorter races (through a 5K) are always a challenge for me.  My muscles just don’t like to fire that fast for that long.  But, 2 miles…I could do that.

This is not a difficult race at all.  You simply run down the street until you reach this little island of shady trees, run around that and head back.  On the circle around the tree, you hit the halfway point.  The first mile of this race always seems to fly by.  It’s not like there is a crowd out there making it feel easier, but I think the first mile just goes so quickly because I am so zoned in on my running.  Especially these days…because I really need to pay attention to my form…and that sometimes means dialing back on the speed.  But my hip was behaving, and when I made the turn, I felt good.

Of course, the second half of the race never feels easy.  My legs were tired now…and I pressed on, really making sure to lift that right knee up and not rely on just my left side.  All that focus takes energy and I felt like I was losing my pace.  I reached the half mile remaining mark and pressed on…just hoping to get in before 16 minutes.  I could hear the announcements, so I knew I was coming up to the finish chute.  Women were to go in on the left side, men on the right. 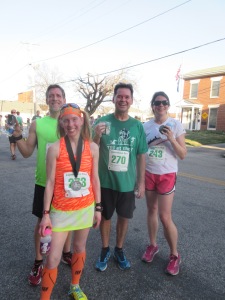 Here is where a couple of women really just kicked it.  I don’t have a finishing kick.  I never have.  By the end of a race that I am truly racing, I just never have any steam left in my legs.  It was okay…it didn’t bother me…but people who can just put on those afterburners and pass up people right at the end…that’s a gift.  My friend Kelsey does that.  ALL. THE. TIME.  Once I know I can trust these legs, working on finding a finishing kick will be priority.

All that being said, I crossed the finish line at 14:36…a full 6 seconds faster than my 2013 time (which I ran when I was in the best shape of my life…although we also had 20 mph headwinds that year).  But a PR is still a PR, right?  Right!

So the official results of The Leprechaun 2 Mile Run is that I finished in 14:36.  I was the 19th overall woman.  And that’s all I got until official results are actually posted.  But this was a very fun run.  I’m glad I opted to do this rather than hills.

Afterwards, Matthew, Laura, Michael, Cathy and I took a little stroll to cool down and stretch out the legs.  A little bit of active recovery.  And then we parted ways.  It was a good night to race.  My confidence is slowly coming back.  Every little bit helps.  Every little bit.

It’s the small victories that really bring me joy these days.